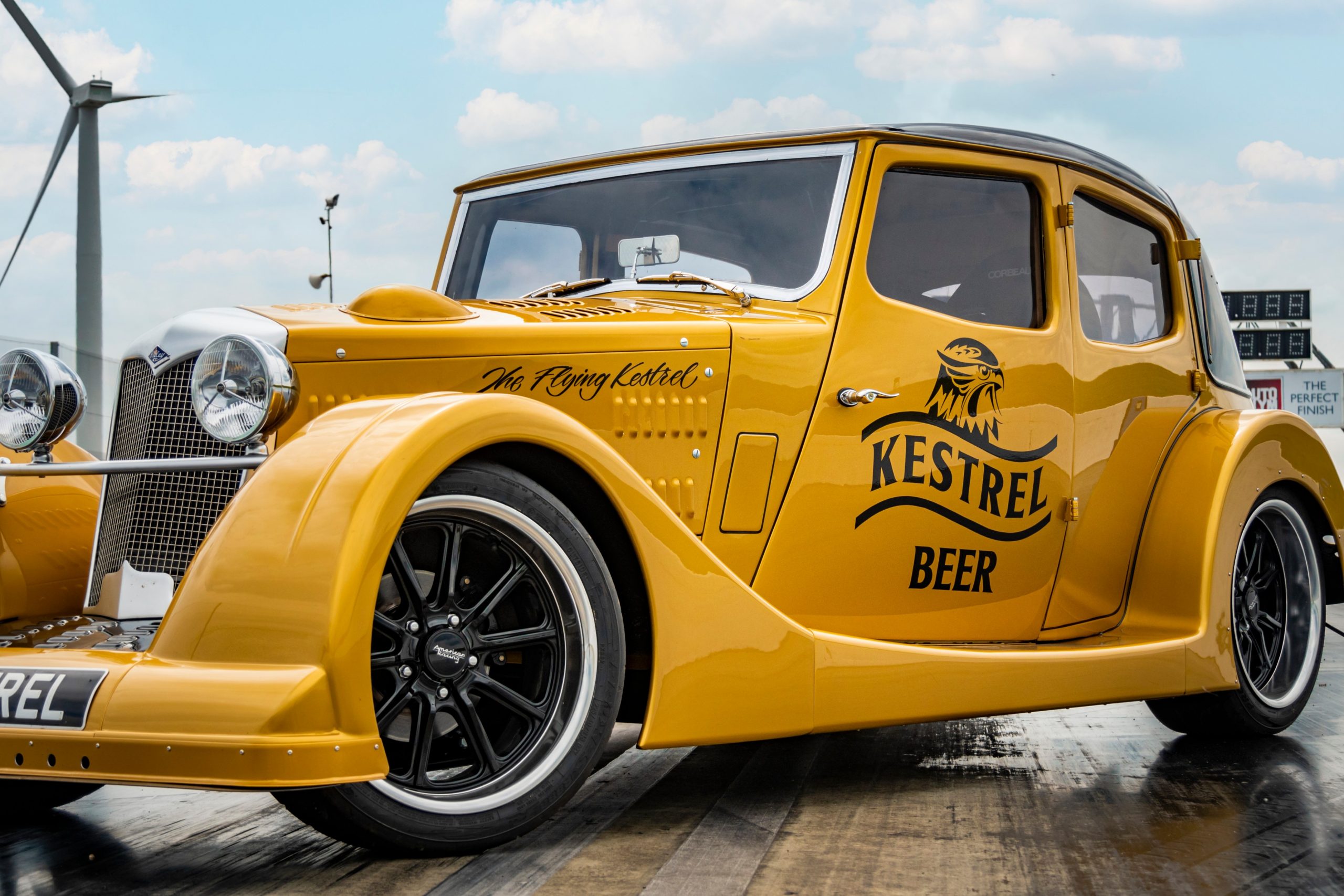 Series two is to be broadcast across linear and digital networks to over 300 million people worldwide from September 2021. Part two follows the dramatic finale from series 1 which ended with a cliff-hanging high speed crash. Produced and distributed by Insight TV, the leading millennial-focused global channel provider alongside factual entertainment and live sports event specialists Spark Content, the documentary is set to introduce the award-winning lager brand to a younger audience and build brand engagement through the unique positioning of The Flying Kestrel project.

Launching in September, Season 2 documents the epic ‘beers, tears and gears’ journey of Nigel McNally, founder and CEO of Brookfield Drinks and his son Joel McNally as they set about rebuilding the car after the tragic turn of events that saw the car roll 4 times as it careered off the airstrip during the 200+ mph record attempt. Alongside an intimate glimpse into the work of acclaimed engineer Jonathan Webster, it is not all plain sailing with some dramatic setbacks along the way. Season 2 documents the rebuild and the changes required to maximise the cars performance, as the team oges for glory and attempts the records again.

The Kestrel brand, one of the longest established British lager brands; hugely popular and successful in the 1980s and 1990s was purchased by McNally in 2012 and now includes 5%, 7% and 9% ABV variants. The award-winning range has been developed using the Super Premium lager as its foundation, as it continues to be the UK’s best-selling 9% abv canned lager brand.

“In true Kestrel fighting spirit, we have overcome the calamity of the drama shown in series 1 and come back stronger than ever to have another go at breaking some world records. It’s the perfect showcase for our brand and testament to some important traits we have always held dear – unflappable teamwork, the ability to overcome adversity and the power in following your dreams and sticking your foot down on life’s accelerator,“ said McNally.

“The Flying Kestrel’s amazing story is still unfolding and with every episode we reveal the twists and turns both car and crew take in their quest to realise their dreams,” said Arun Maljaars, Insight TV’s Vice President of Content and Channels.

Production for the series has been ongoing since series 1 and has followed the intricacy of taking a 1930s 9bhp car and turning it into a turbo charged 2.5 litre, 5-cylinder work-of-art, capable of 900bhp and speeds of over 200mph. The Flying Kestrel will start a tour of UK events later this summer, where the iconic lager range can be sampled, and consumers can get up close and personal with The Flying Kestrel itself.
A new TV commercial will be launched later this month and the marketing campaign will span print, social and digital, PR and e-commerce.

Kestrel lager was a hugely popular and successful brand in the 1980s and 1990s when it was supported with much-loved advertising campaigns featuring the comedians and actors Hugh Laurie and Russ Abbot. Having maintained a loyal following in subsequent years, in 2012 its quality and potential were recognised by Nigel McNally, who decided to take the bold step of purchasing the award-winning Kestrel lager beer brand and setting up the Kestrel Brewing Company in order to nurture and develop it.

Under his stewardship the Kestrel brand has now returned to its Scottish roots and is being brewed under the Holy Brewing Method at a state-of-the-art facility in Glasgow, adjacent to Glasgow Cathedral. Brewing has taken place at the site since 1556, making it the oldest continuous commercial concern in Glasgow.

The beer which now comes in 5% and 9% ABV variants received a gold medal from the Monde Selection Awards in 2015 and a silver medal from The International Beer Challenge in 2019.